Health leaders are celebrating after receiving recognition for their support of military personnel, veterans and their family members employed by the NHS in Sunderland. 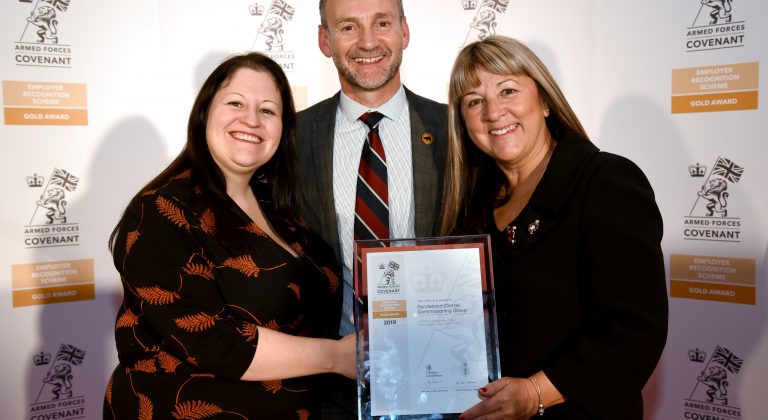 The Employer Recognition Scheme Gold Award represents the highest badge of honour available to those that employ and support those who serve, veterans, and their families. Under the scheme, the Ministry of Defence publicly recognises the commitment that organisations such as NHS Sunderland CCG make by acting as advocates for current and former military personnel and their families.

Gloria Middleton, Armed Forces Lead at NHS Sunderland CCG, said: “Receiving this award is brilliant news for a team that has worked tirelessly to advocate for the wellbeing of veterans across our city.

“This is a group with very specific needs and we’re thrilled that the Ministry of Defence has recognised our commitment to veterans and other military personnel by awarding us gold status.

“We’re committed to supporting the armed forces community both as employers and in the services we provide, and for us to be included amongst such remarkable recipients is a great honour.”

100 winners have been recognised in the awards for their long-term commitment to the armed forces, with companies from the public and private sector achieving the gold standard.

David Gallagher, Chief Officer at NHS Sunderland CCG said: “The employer recognition scheme primarily recognises support for veterans in the private sector, and we are proud to be among some of the first public sector organisations to achieve this status.

“Sunderland CCG is only the second CCG in the country to have been awarded gold status, which is not only a great source of pride for the organisation but is also a testament to the hard work and dedication of everyone at the CCG.”

The ERS designates bronze, silver or gold status to organisations that, having signed up to the Armed Forces Covenant, demonstrate or advocate support to the Armed Forces community. To receive the honour, the CCG has shown its Forces-friendly credentials and policies.

David Britton served in the Royal Air Force for 22 years and is now a Cadet Forces Adult Volunteer. He is employed as a Commissioning Manager for NHS Sunderland CCG and says, “It’s excellent that Sunderland CCG affords additional special leave to staff who are in the Armed Forces Reserves and that support is extended to their families when individuals are deployed on active service.

“Employer support for reservists is vital as the regular Armed Forces now rely heavily on the reserves in times of need around the world. Having been deployed on numerous occasions it was important for me to know that my family were being looked after and supported whilst I was away.”

Gary McLafferty is the Director of Engagement for the North East Reserve Forces’ and Cadets’ Associations, part of the MOD. He said: “The Defence Employer Recognition Scheme Gold Award represents the highest badge of achievement for those that employ and support members of the Armed Forces – past and present – and their families.

“The CCG is recognised for having gone that extra mile, turning their written pledge of support through the Armed Forces Covenant, into concrete action and making a positive difference to our people during and after their time in uniform.”